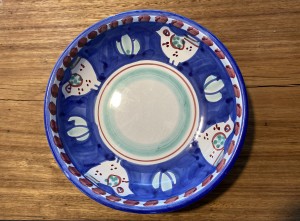 I carried this bowl, along with seven others, from where we left our 1971 Ford Escort Ghia in the Calais Ferry staff car park, onto the ferry with Jane, heading back to London. There’s a photo fading in an album somewhere, a photo I took of Jane surrounded by the jetsam of a couple of months’ wandering: bags and ripped backpacks and dusty boots, like a grunge nest beneath the ferry’s plastic seats.

The bowl came from Amalfi, of course. From a little store owned by the Fusco family. Melissa Fusco, gentle matriarch, born in Belgium and married a local. There was a photograph on the wall of a ludicrously handsome young man, their eldest son, dead at 19 after his motorbike mishandled one of the Amalfi coastline’s hairpins.

They had a fluffy little dog named Frou Frou.

I bought ceramics from the Fuscos. Those 8 bowls, a larger serving bowl, a set of those olive oil and vinegar bottles that seem to make so much sense when you’re lunching in Italy but retreat to the back of the shelf, unused, once home. I remember mailing something (the younger Fusco son accompanying me to the post office to assist my pidgin Italian) back to Australia, so perhaps I didn’t even carry this one remaining bowl onto the ferry after all, maybe it was just the big bowl that I lugged. Ah, memory. Does it matter? You don’t know and probably don’t care. And really, it’s just slowing our story down right now. 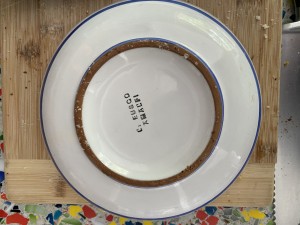 Melissa Fusco spoke at least five languages. Some passeggiata I walked Frou Frou, slowly, when my ankle deflated a little – after we’d been in town a few days. We’d driven in, Escort burning oil and chugging smoke, cranky as hell because we’d spent the previous night trying to sleep in the car somewhere beside the road outside a forgotten little town somewhere across the top of the heel of Italy’s boot. Apulia? Jane had been driving for two days, since we’d arrived back on the ferry from Greece, and particularly since I’d overturned on my ankle and driven the (rather bulky, it must be said – we had eaten well those months) weight of me and my backpack down onto it, and then me onto the ground, foot at right angles to calf.

Is this story reeling backwards? This shutdown is sending my gaze backwards; it’s safer.

That car owed us nothing; we had left it in Italy while three of us – Jane, Susan, and me – took a ferry to Greece. It was an Amsterdam gift, months earlier. A couple of guys in the hostel were returning to their kibbutz the next day and couldn’t be bothered paying to un-wheel-clamp it from the street below. For the couple of hundred guilders’ fine, ‘twas ours, which was rather fortunate as we were already kinda skint one week into the grand euro tour. We drove it through four countries, catching up with my old flatmates in Milan, and settled for a while in a deserted, pre-summer beachside campground on the Adriatic Sea.  We were harassed in Bologna, propositioned in Bari, and scared ourselves shitless driving down a deserted road near Monopoli.

We parked in Brindisi. The three of us took a ferry to Greece, but only two returned to the Escort.

You know, I spent two separate nights of my life, last century, in Athens airport, but it wasn’t until 2016 that I actually flew in or out of there. Our first night in Greece, an airport rendezvous’ (Susan’s friend Peter, an English raver mate joining us for a week) flight was delayed, so we hung out until the first port bus at dawn.

Sue smashed up her knee in a moped accident on our second island, Spetses. Peter flew home. Thanks to Sue’s injury, we met Vangelis (physiotherapist to the Athenian volleyball team — looked like Kevin Costner), his English girlfriend, and their coterie. We taught them that Australian girls often win at drinking games, even if it’s peach schnapps on the table. Despite the Spetses hospitality, after a few days we knew we had to get Susan and her swollen leg back to London, and Jane and I bore her onto ferry, bus, and back to the airport for another late night flight.

Athens airport at night in the 90s – backpacker limbo – would be the perfect setting for a one-act Gen X play. Everyone looked like Ethan Hawke and Winona Ryder, or perhaps (again!) that’s unreliable memory talking. I do remember Jane and I were reunited with Jose, a gorgeous Mexican bloke we’d met on the ferry to Greece weeks earlier, and who had found “the love of his life”. We talked about love until dawn. I was 23.

But back to this bowl. After Athens, coasting around the Cyclades, spraining my ankle, returning to Italy, collecting the car, chucking the accumulated booklet of windscreen parking tickets into the glove box, and driving for a couple of days in a vague western direction, Jane and I had had enough of our communal company. By the time we arrived in Amalfi, nearby Vesuvius’s ancient smoulder had nothing on our imminent argument. I was the one who spoke un po’, so I left her in the driver’s seat and hobbled out of the car to haggle with Signore Dollaro at Pensione Sole. In spring 1994, we could stay a block away from the Amalfi promenade supercheap. Dollaro then scoped my ankle and said, signorina, you need a doctor. I left Jane to check in, and limped to the clinic.

Dottori Aldo and Giancarlo bandaged my ankle, gave me some anti-inflammatories, and insisted we return that night for pizza.

We made some friends in Amalfi; I bought ceramics from the Fusco family’s shop. We left Amalfi the morning of my 24th birthday. 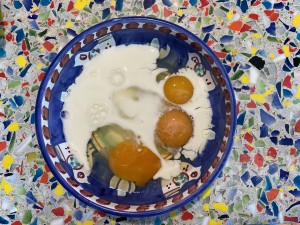 This one’s the only one left of my Amalfi bowls, over a quarter of a century later, and I’ve just used it to make French toast for my sons while we are in lockdown.