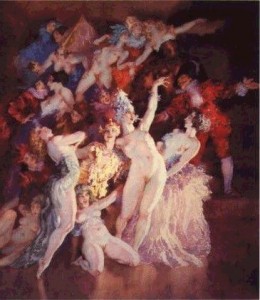 By 2003, a modest fashion marketing consultancy was consolidating itself without any great personal strain. I’d started at Brisbane Arcade in the guise of marketing manager, and was throwing a few parades and events together for various clients.

I was approached by the RNA to pitch for a new-look Wool Parade for the annual Ekka: their brief was to focus on their yoooooof market that year, and apparently I’d come recommended as one who might be able to “speak to that demographic”. Suggested a budget, I let my imagination go and, unintentionally, doubled it. Taking inspiration from a Norman Lindsay watercolour, I gathered a cluster of wafty concepts under the title “In a twilight grove”. The stage designer, Steve, and I had fun designing a lit waterfall scrim backdrop. We imagined nymphs and moonlit eucalypts. Dyke almost always did my lights. He had the perfect set-up to complement. The RNA accepted my quote without a fight, and we were off.

Months of preparation with great people meant that by the time the Ekka rolled around in August, as producer I had little to manage except oversee and troubleshoot. Front of house was in hand. Backstage was under the competent direction of Vanessa and my sister Jacqui, and an earnest gaggle of student dressers. The models, like most I’ve worked with, were bright and friendly, and there was comradely atmosphere in the generous backstage rooms (the benefit of setting up in a great agricultural hall). The three blokes, Julio, Kai, and Cliff, brought in golf clubs and turned their dressing room into a putting green over the ten days of Ekka. There were about 50 shows in all, which was a lot of walking. Jacqui was also our on-site reflexologist, doling out reflexology and massage as required.

A sponsorship deal meant that a local TV channel had created the AV loop to play on a couple of background screens. I’d played around with a vague script and patient editor up on Mount Cootha for a few hours to create something moody involving a moon and mist.  The soundtrack had been fun to put together. Commercially-edged, for the Ekka. Goldfrapp and Paris Combo and an Elvis remix that was doing the rounds at the time. (I do wish I’d thought to film the actual show for my records.)

All of this happened without drama, and between running one or two mending errands and applauding heartily at the end of each show from a changing, random crowd position, I found myself with the luxury of spare time between shows and at the end of the day. Time to explore flank and fringes of the Royal National Agricultural show. I inspected quilts and fruit displays. Watched an emu hatch from a green egg in a heated Perspex box (a long process that took a few return visits). Chatted with the stall holders in the wool pavilion: optimistic alpaca breeders, rainbow sock knitters, salespeople from the Tenterfield Saddler.

After we wrapped the last show one night, locked down our temporary rooms, and farewelled the remaining crew, S and I shared a sunset joint on the Ekka chairlift. Our feet dangled above the overweight crowd and the tired mechanism above our heads shuddered over each contact point. As the swinging seat approached sideshow alley, the lights and amplified tinny sounds shoved out and up. Brassy electrics winning a battle against the dying sun. Crazy rides the dreams of demented engineers. Rockets and dodgems and wheels and lasers.

“Some of these rides have strange names,” I said, pointing down. “Such random inspiration. Look at that one: ‘Superb Owl’. Why would you call a ride that? I love it.”

“Caz,” he chuckled. “I think they might mean ‘SUPERBOWL’.”