*** As I wrote my way through this rant earlier today, Coles doubled down in backflip town. NOW they will cease handing out free bags at the end of August. While this will be, eventually, good news, I thought I’d set this piece free anyway. Because, honestly, some of you bloody whingers need to get your act together.***

Oh, I am more than a little annoyed.

And I’m supposed to write nicely to you. I understand that the philosophy behind public engagement encourages a supportive approach to making people feel like a valued part of the proposed change, to assist in dealing with the challenge of adopting different behaviours (particularly when these behaviours are beneficial to society), to speak kindly and help people feel loved and relevant, as part of the behavioural change that’s happening, so they’ll own a slice of the conversation and not walk away from it all…

But BUGGER IT, I AM BLOODY CRANKY.

You are a bunch of big whingeing entitled waste babies.

Coles, all you had to do was get your message right. You even had a scapegoat, for Uma’s sake, since the plastic bag ban IS LAW.

And people. You big waste babies. All YOU had to do is REMEMBER TO CARRY YOUR OWN GODDAMN BAG.

Yes, Coles, you are freaking commercial cowards. But, this time, blame doesn’t rest solely with the big guys. Because I’m sure those “reuseable” thicker plastic bags cost a stack of a lot more than the thin grey turtle killers. I guess this current situation is not your ideal choice, either. Your stupid competitive approach, rather than collaborating with Woolies on this issue, has done you in.

No, wastebabies, this one’s on you. Con-freaking-gratulations, you win. You’ve taken a positive piece of legislation (here in Queensland) and MADE THINGS WORSE THAN BEFORE.  ‘Cause look around – do you see many of those “reusable” bags walking with their big wastebaby owners back into Coles?

You asked for it, no, demanded it, when you whinged and whined and bullied checkout operators for the plastic you see as your entitlement.

Over the past week, I have visited an Indian takeaway in West End, a bakery in Highgate Hill, and a general store in Darra. Each of these establishments displayed a sign at the counter, prominent and at eye level, stating that because of the new Queensland law, they could not provide plastic bags, but a “reusable” bag could be purchased for ten cents. Yet, at each of these three stores, the assistant automatically moved to place my purchases in a plastic bag – without even asking me, and definitely without asking for ten cents. Why? My guess is to avoid the hassle/drama/angst/abuse they’ve been copping from customers, those wastebabies who feel that somehow they are missing out on their free plastic bag entitlement. So these small businesses now absorb a fee that their customers should be paying, a fee designed to encourage people to remember to carry a bag into a shop. Even if Coles stops giving out free bags at the end of the month, will all these smaller businesses cop it? Lose, lose.

It’s not as if Australia is leading any plastic-bag-free charge here. (South Australia, maybe.) Dozens of countries have instigated bans or levies over the past decade or so. Bangladesh was the first, after plastic bags waste contributed so seriously to floods in that country. For Bangladesh, it was, literally, a life-and-death decision.

What drives this international swell against plastic bags? Concern about the impact that bags have on the landscape? Self interest (some African bans follow loss of livestock after eating bags)? Marine impacts (heard of floating syndrome in turtles? It’s awful.)? Aesthetics? Common bloody sense?*

Apart from being a decent and conscious human being, yes, I have historical skin in this game. In 2012, I accepted a contract to work with an environmental organisation to coordinate a campaign designed to remove free plastic bags from shops in Queensland. When I began, the fledgling campaign had been tentatively named “Ban the Bag”, but in the interests of a more positive approach, I changed this to “Plastic Bag Free Queensland (PBFQ)”. 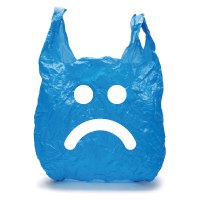 It was my first engagement in the environment sector since 1989, when I worked at the incipient Brisbane office of Greenpeace Australia as one of their original volunteers, helping launch the “Adopt-a-Beach” campaign. This, the first Greenpeace campaign for Queensland (somewhat presciently) involved cleaning up waterways and beaches in a forerunner to the excellent work now done by organisations such as Tangaroa Blue.

Like Adopt-a-Beach 20-odd years earlier, PBFQ was launched with a function on the shores of Moreton Bay, as marine impacts were (and are) one major reason why the removal of plastic bags is so important. More on that, elsewhere*. Clean Up Australia’s legendary Ian Kiernan AO joined John Phillips OAM from Keep South Australia Beautiful to help launch the campaign. Within months, an online community of over 2000 supporters rallied.  Key public figures from Bindi Irwin to Michael Zavros pledged their support. Chef Ben O’Donoghue donated a day of his life to film a fantastic short film called “Gutful” thanks to the generosity of Phil MacDonald and his team at GPYR. No less than three Australians of the Year (Kiernan, Peter Doherty AO, and Ian Lowe AO) joined supporters Nick Earls, Veny Armanno, Jessica Watson, and many others.

The PBFQ position was not without its challenges, and not just the political climate in which it dwelled. I’d brought my inner teenage environmentalist along to the gig, and her naivety was tested by office bullies and personal politics. I was working in an unwell organisation. In addition, I experienced a little shades-of-green environmental angst. A certain corner of the movement felt that plastic bag ban campaigns were a misguided use of limited resources that should be directed towards serious, pressing “dark green” issues such as climate change. I understand the validity of this argument. However, in an interesting discussion with Ian Kiernan, I saw how waste issues could be considered a gateway to a deeper form of environmentalism. His philosophy was that waste is tangible to all (eventually, even those who forget their reusable supermarket bags), and that an awareness of the waste that we produce as humans leads to an awareness of our environment in general, and our impact upon it. When you realise “there is no away”, you question much of our consumerism and disposable society.

PBFQ was smashed to bits in a single morning. A new import, a right-leaning editor of the state’s newspaper got wind of a discussion paper (considering a possible plastic bag ban or levy) being considered by the LNP government. His front page dog-whistle (the incorrect and histrionic “Shoppers will be slugged $2 for a bag”) to the premier was answered by Newman’s unilateral decree “There will be no slug” – which he announced immediately, without any cabinet consultation (Welcome to Queensland). Death by slug.

And a certain mindset of plastic bag entitlement was strengthened, a progressive opportunity lost. Why do people think they are losing some basic right when losing access to free plastic bags?

On a distant acquaintance’s Facebook, I read a boast about how she just “used lots of those produce bags” to get around the ban. Really? What an effort. How about applying that energy towards carrying a big reusable bag? Whatever would you do with all those bags afterwards? I guess they’d go straight in the bin, being too small for much else.

One main reason behind removing free plastic bags is to prevent them from escaping into the environment, particularly the marine environment. They’re slippery little suckers. Granted, when they are wrapped around household rubbish, they’re less likely to blow away. But is this even necessary?

Oh, please. I’ve been having this friggin conversation for six years. I guess another hour won’t hurt.

In ACT and SA, sales of bin liners, it was reported, did increase a little after the plastic bag bans – but not as much as expected. And in ACT, bin liner sales actually dropped, as people looked at other options.

And even if bin liner sales HAD increased by 100%, this is nothing like the amount of plastic supermarket bags that had stopped being handed out. The South Australian government estimates that their ban has saved 400 million bags annually.

*For more information about the impact of marine and other impacts of plastic bags and other plastic waste, here are a few links.

These first leisurely days of 2012 have seen a few leftovers from coastal New Year’s Eve celebrations washing up on the beach. While walking, I’ve collected balloons in various states: from printed “HNY!” remnants with tendrils like a jellyfish to the full (deflated) monty. I’m suprised more coastal councils don’t follow the Sunshine Coast Regional […]

There’s this guy who lives in my street. Called Dutch. Rides a motorbike. Looks like the type of cat who’s already gone through a few of his nine lives. Lives in the front half of a rented place at the bottom of the hill. Dutch, of course, is not his actual name. I don’t know […]

In 2019, Queensland Conservation Council (QCC) celebrated a milestone — Queensland’s peak environment body turned 50. To commemorate the event, I researched and wrote a (reasonably brief) QCC history. It took a lot of willpower not to let the research take over! Fascinating information is hidden in the hundreds of boxes of documents held at […]