File this story under op-shopper’s boast, except, you know, I wasn’t even in an op-shop at the time.

But heavens, what a discovery.

I can’t even remember the original reason I was in Reverse Garbage, now, but it wasn’t to look for paintings. Yet there they were, four or five boxes of them: all oils, most in lovely vintage frames. Coastal landscapes, a few portraits, rural scenes, waterways, forests, a horse or two. And florals, arrangement upon arrangement.

I pulled some striking pieces out, and then some more. 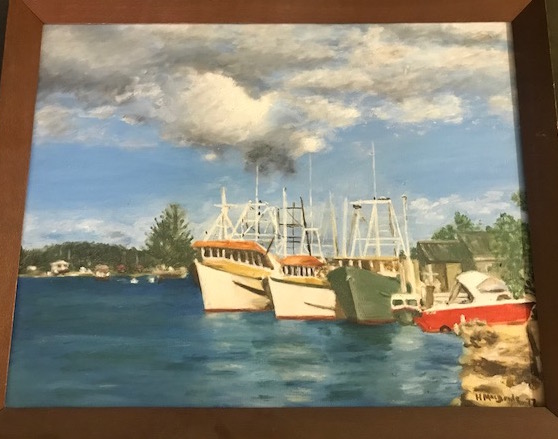 Glasshouse mountains and wide sandbanks. A dark little rainforest. A small town harbour with 1970s-era boats, I held on to with the self-deluding excuse: my partner would love this (it’s really for me). A Lynch-esque portrait gripped me. I gathered flowers to create a feature salon hang for my parents’ wall. A bouquet in old oil. 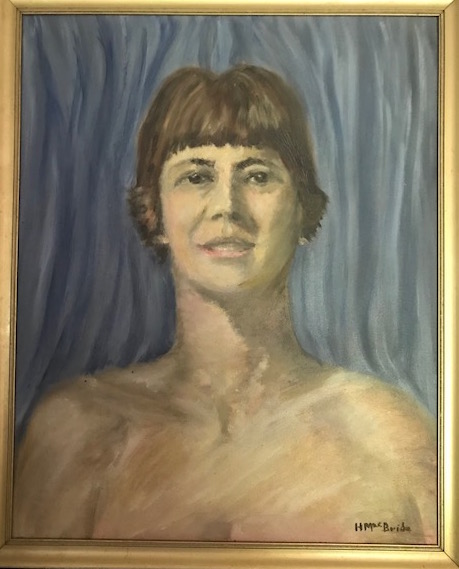 Feeling greedy, I returned a few to the pile. Two portraits replaced I now particularly regret. I halved my swag and still walked away with a dozen beautiful paintings. At home, away from that junky environment, they glowed. I stared at them on the tiled floor.

Why would anyone dump these at Reverse Garbage? 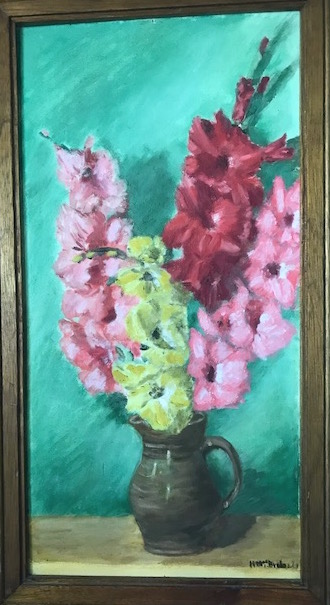 I examined the signature: H MacBride. Deceased estate, I assumed. There would have been a hundred paintings in those boxes.

Most had a description pencilled on the back. A pattern emerged. I noted the majority of landscape painted was southeast Queensland coast or hinterland, from north of of Brisbane to Coolum, and particularly Caloundra and the Pumicestone Passage.

My friend Wendy grew up in Caloundra in the 1950s and 60s, and knew artists there. I sent a speculative message. Any clues about this dumped art? Who was H MacBride?

“That must be Heather MacBride,” she responded. “I heard she died a few months ago.”

“She surfed with Ma and Pa Bendall.”

I sent through the portrait: yes, it was a self portrait of Heather MacBride.

ogled, and found a tantalizing slice of an obituary for Heather MacBride, but the link was broken.

My friend texted back: an image of eight floral oil paintings. So did my other friend, who was ecstatic at her haul of beach scenes and flowers. In their images, I noticed beautiful paintings that I hadn’t seen in the RG boxes, earlier.

There must have been more!!!

Wendy sent a message asking if I could pick some up for her. It was Saturday afternoon, and RG would close in 5 minutes. I made plans to be there Monday.

Some of the work had been framed in gorgeous old frames, particularly the larger paintings. I dreaded to think that these had been collected by people to use the frame only, and I hoped that the paintings wouldn’t be dumped. The two portraits I’d left behind haunted me: one was of a swarthy man with an intense gaze, the other a blue-eyed woman in a red scarf, hand on chin, looking pensive.

I arrived a few minutes before RG opened on Monday, and asked about the paintings. As much as I love RG, I explained my surprise at the art ending up here (at a depot to recycle materials otherwise destined for landfill) rather than an op-shop, or even a gallery?

The driver who’d collected the donation happened to be on-site: he explained that he’d picked up around 300 works of art from a man in a suburb on the north of Brisbane. He thought it was the artist’s nephew.

But didn’t anyone in the family want her work?

The driver believed that the family had already taken what they wanted (or could). These were the rejects! They’d also offered them to some places in Caloundra, and the regional gallery, he said, but nobody was interested. The collection was too large. RG was a distress option.

I explained that I had been asked to buy some work for an old acquaintance of the a
rtist, and was invited into the back room, where another hundred or so paintings were waiting to be priced. Some of these works were of lesser quality, but amongst the dusty frames were more gems.

Sadly, my two portraits were long gone, but I discovered another image of the blue-eyed lady in this back room. 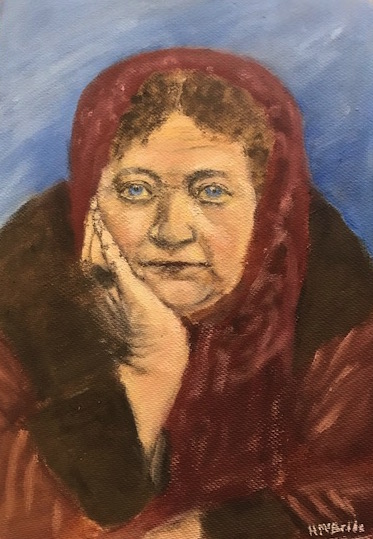 Later, I give away paintings like it’s Christmas, and it is so much fun. Friends have floral arrangements, surf breaks, a serene image of a canoe on the upper reaches of the Brisbane River.

A discerning connoisseur visits and falls for the portrait of Chairman Mao as a young man, so I give it to him. I complete my parent’s salon hang wall, and create a small collection of hibiscus paintings at home. I am a little bit in love with Heather MacBride, and I wish I’d met her.

Wendy’s mum tells me she was a doctor in Caloundra. She went to Caloundra State School, then Nambour High (“I don’t think she wore shoes until she went to high school,” she says.).

Wendy sends me the cover of a 2018 calendar put out by Caloundra council.

There, amongst the Moffateers, is Heather MacBride and her surfboard in 1974. She is beautiful.

Old Filth, and all that.

This post is seven years too late. A perverse and quite irrational sense of anti-nepotism, for want of a better term, has prevented me from becoming acquainted with Jane Gardam‘s beautiful writing before this year. We are not related (sadly!); even if we were, since Gardam is Jane’s husband’s surname, I couldn’t even claim shared […]

Oh, there are no photographs, as we were enjoying the moment far too much to bother recording. As usual. But here’s a recipe for a cocktail we created last weekend. Get invited to two of your dearest mates’ place for a kind of housewarming on a Saturday night. Go to the Yandina farmers’ markets […]