I’ve been back working with Brisbane Arcade recently, for its 90th birthday celebrations.

I love Brisbane Arcade: its bloody history, its Art Deco bone structure, and its personalities — many of whom I got to know when I was marketing manager there a decade ago. For the 90th, I’ve had the exceeding good fortune to work with the current (awesome) marketing manager and a canny publicist. The luxury of a team of three! Just like Charlie’s Angels.

As well as event production, this time around, part of my work involved researching past arcade tenants, particularly fashion tenants. And it’s been a joyful little voyage of discovery. I’ve been able to reminisce with designers including Royce Facy, a local treasure. Revisit the RAQ awards (always just a little self-conscious, those televised 80s/90s galas) and the women who would have been supermodels, had they grown up in a city with greater prospect than this “big country town”. Giggle at blowsy advertising claims in old Trove searches. Try to imagine a retail environment where a store that only sold umbrellas made perfect sense. (Or an arcade where two successful dancewear stores thrived for years, facing off at opposite ends of the balcony level…)

The process has encouraged a contemplation of the nature of history, of what gets remembered (often that which is uploaded, or oft-copied). The creating of history through the telling. Wars that are described by the victors and all that.

Has which chosen history a Wikipedia page?

I’ve met a talented man who doesn’t have a Wikipedia page (yet).

I thought I’d met, or heard about, a fair swathe of southeast Queensland’s dressmakers and designers from the second half of last century. Surrounded by talk of them since my first after-school job, selling paper patterns in the family business, I sold fabric and haberdashery to most of Brisbane’s dressmakers over a couple of decades in the rag trade. So it was near-mortifying to only be introduced to the designer Harvey Graham so recently.

Serendipitously, as we were planning the Arcade’s 90th events, a southside vintage store had taken delivery of a pristine Harvey Graham collection from a deceased estate, and Andra our publicist had made contact. These outfits were gorgeous: late 60s and early 70s, neat. Adorable.

I googled him: nothing, save an oblique nod to his awesome taste in architecture. (The Graham House in Indooroopilly, noted by Rob Riddel as one of Brisbane’s key mid-century designs, is now a vacant block for sale.)

But then I started talking to people who’d remember.

“Your grandmother loved Harvey Graham,” said my mum. “He was her favourite of the city designers.”

My dad remembered his cool car, of course, and also his consummate elegance.

Others remembered his attention to detail: Buttonholes of perfection. Belts to make you swoon. Trim detail matched only by Helena Kaye, or his arcade neighbour, Gwen Gillam: a designer who one fashionista with a longer memory whispered “wasn’t as good as Harvey, but she was louder.”

But the internet didn’t remember him, and a tip from local fashion insider Michael Marendy led me to one grainy picture of the confirmed bachelor.

Harvey Graham’s salon moved from South Brisbane to Brisbane Arcade in the 1960s, and remained there until the early 1980s.

He’s back in there right now, and there’ll be a long-overdue Harvey Graham parade next Friday. 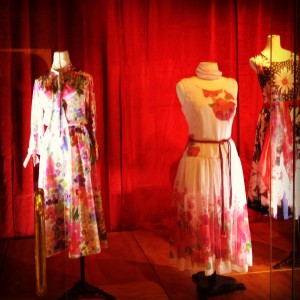 I can’t wait. It’s nice to give back some kind of history, even if it’s just a shout into the www abyss. 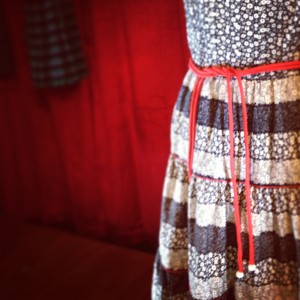 Travel writing is a tough slog

Been working on a couple of speculative travel pieces following a lovely recent European break. I wrote one and I can’t think of any publication that would even consider picking it up, so here she is here: Monolithos.